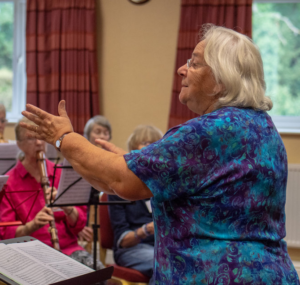 Ruth Burbidge was born in Birmingham, UK, and studied music at The Royal Academy of Music.  After several years teaching she spent a post-graduate year at Trinity College of Music, London, with a focus on early music.  Here she studied recorder and Baroque music with Edgar Hunt and won the prestigious Raymond Russell Prize for Harpsichordists in all Conservatories in Great Britain, under the tutelage of Valda Averling.  After Trinity College she became a lecturer in music at The City of Leeds and Carnegie College.  When she became a mum she concentrated more on teaching recorder, flute and keyboard, and developing a postal music service (www.recordermail.co.uk).  A recent venture has been a return to conducting and she is much in demand for festivals and workshops throughout Britain.  Ruth conducts a recorder chamber orchestra of eleven players and plays in Recorders Incorporated.

The program will include music by Handel, Lupo, Robinson, and Charlton as well as traditional tunes.